When DJI unveiled the Phantom 4 drone on March 1st, the tech press went wild. The Phantom 4 quadcopter manages to do what the Phantom 3 did one year earlier: Set a new bar for the prosumer aerial drone.

We know what you're thinking: Phantom 4 vs Phantom 3... How much of a leap forward is the Phantom 4? Is it worth the extra $200 over the Phantom 3 Professional? Is it worth investing in a new Drone World Phantom 4 Executive Kit? (Answer: Yes...we're not biased...)

Let's answer those other questions.

The Phantom 4 is considerably faster thanks to more powerful and efficient motors, a low-drag shape, a superior battery, and a new Sport Mode. (Engadget initially referred to this as a "speed mode.") Sport Mode, combined with larger (and easier to install) Phantom 4 propellers, unleashes the drone’s full potential, sending more power to its four enhanced motors to give better lift and acceleration. Our own engineer managed to reach 56 MPH (with some backwind), but some Phantom 4 owners have reported speeds of almost 70 MPH!

If you're interested in the FPV racing experience, the Phantom 4 is a great entry point. The excellent handling and speed make it a serious competitor in the field, one made all the better with the right Phantom 4 FPV goggles. In the arena of the DJI Phantom 3 vs Phantom 4, hand this one to the Phantom 4.

A new and more powerful Intelligent Flight battery allows the Phantom 4 to travel farther and stay aloft longer. Where the Phantom 3 Pro eeked out as little as 16 min. of flight, the Phantom 4 battery enables the drone to stay in the air for up to 28 min. The radio and antenna now operate on 23 decibels of gain versus 20dBm for the Phantom 3, providing a more focused signal. Drone World’s new Phantom 4 Executive Kit with its recently unveiled Ver. 2.0 Range Extender is expected to push the Phantom 4 range to 5+ miles. Who needs to fly that far one might ask? A spokesman at the company says that this ‘over-engineering’ lets the system to operate much better than stock in close range environments, allowing for better signal penetration in and around trees, near large clusters of home wifi routers that cause interference, or when flying long distances at low levels.

The Phantom 4's 28-minute max flight time and 3+ mile signal range give range enthusiasts their best opportunity yet to reach new distances and heights. With our Phantom 4 Range Extender System, you can expand your signal range even farther.  (Yes, such a thing exists.) In the Phantom 4 vs Phantom 3 battle, Phantom 4 wins again.

Check out a video comparison between the Phantom 3 Pro and Phantom 4 below:

Some reviewers have been very impressed with the Phantom 4's updated camera. Alexander Thickstun of Digital Trends stated: "I’ve flown 200 missions on the Inspire 1 with its stock Zenmuse X3 camera, and I feel the Phantom 4 actually produces better footage."

With its 4K UHD camera and our signature Range Extender System, the Phantom 4 HD video camera gives enthusiasts a wider frontier from which to explore and record their journeys.  A low-cost, high-quality video drone is always a promising venture. Phantom 3 vs Phantom 4: P4 wins again.

The Phantom 4 brings with it multiple new frontal sensors to help accurately “sense” objects around it. “ActiveTrack” is a new mode that allows a user to follow a subject while managing to avoid obstacles from as far away as 50 ft. A pilot can also send out the Phantom 4 to a point on a map without worrying about the drone hitting a stray branch or power line: the destroyers of many a Phantom 3. P4 wins again. 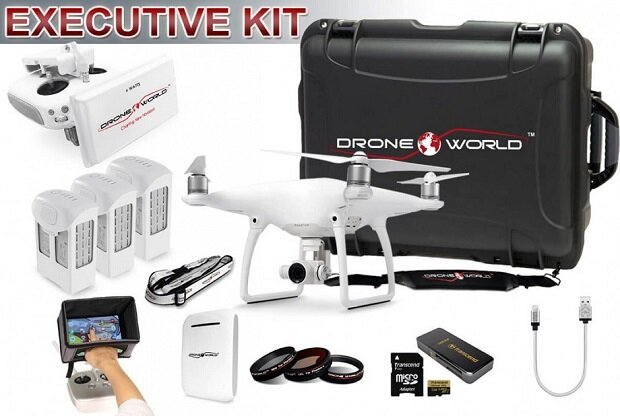 The Phantom 4 is preprogrammed to help pilots, novice and expert alike, fly with minimal worry. Sending the Phantom 4 to a location is as simple as a tap of your finger. An improved Visual Positioning System allows the Phantom to hover over and land on uneven surfaces without trouble. A dual GPS/GLONASS navigation brings in over 30 satellites to pinpoint the P4’s location anywhere on the globe; about 10 more than the Phantom 3. A very sturdy body that is modular makes repairs and disassembly easier (and cheaper), too. The “quick-release” propellers have an ingenius design that is foolproof and sets up in 10 seconds versus about a minute respectively compared to the Phantom 3.

The Phantom 4's many new modes, multiple sensors, easy setup, and fool-proof systems make this the perfect drone for beginners. And with its bevy of features, beginners won't "outgrow" their Phantom 4s anytime soon.

Remember that you can learn more about the Phantom 4 by visiting our Education Center. There you can find Phantom 4 FAQs, Phantom 4 firmware downloads, and much more.

Now you know why Drone World is the premier Phantom 4 DJI dealer.