Like the Phantom 3 before it, the DJI Phantom 4 includes a 4K UHD camera attached to a three-axis gimbal. Pilots cannot detach either the camera or the gimbal--nor should they need to, as both are highly refined.

A Phantom 4 pilot can record in one of five video resolutions. Ranges start at 1280×720 pixels (720p), considered basic High-Definition (HD), and end at 4096×2160 pixels (2160p), consider Ultra HD or 4K. Those videos can be recorded in MP4, MOV, or MPEG formats. Photo resolution maxes at approximately 12 Mega-Pixels (MP), and can be saved as JPEG or DNG formats. 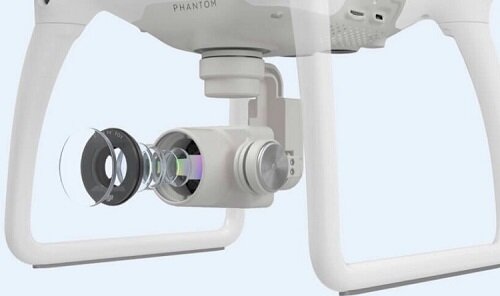 DJI does not list a model of camera for the Phantom 4, although its specs are almost identical to that of the Zenmuse X3, the standard camera found on the DJI Osmo handheld stabilizer and DJI Inspire 1 drone. All three cameras have a 1/2.3” sensor, basically the brain of a digital camera, designed by Sony. The Phantom 4 camera gives the pilot an option of recording at 120 Frames-Per-Second (FPS) slow-motion when at 1080p Full HD resolution.

All media is saved to a Micro SD card with a Class 10 or UHS-1 rating. DJI recommends pilots use a 64 GB card or larger, especially when recording video at 4K.

While similar, the Phantom 4 HD video camera isn’t identical to its predecessor’s. DJI has mounted an eight-element lens for more dynamic range, resulting in more vivid and clear images. The lens is not detachable, though Drone World offers removable filters for it.

DJI has reinforced the motorized Phantom 4 gimbal deep into the body. Along with refined programming, the new gimbal is smoother and more responsive than any previous Phantom. As is the industry standard, the gimbal moves along vertical, longitudinal, and lateral axes.

There you have it: A short, illustrated guide to the Phantom 4 camera. Feel welcome to send us any feedback. And be sure to visit our store for great deals on Phantom 4 bundles and accessories.